Launching in January is Clue Records’ very own singles club – Clue Club. Singles clubs are not unfamiliar in the record business but the way that Clue are approaching their subscription service is. Rather than go a vinyl-only route, they decided modernity is the way and with each new monthly release comes a digital download from the featured artist, along with a dedicated 16-page zine and exclusive podcast.

Firstly, we would like to congratulate all at Clue on the new venture. What sparked the idea for a singles club?

Thank you very much, it’s been a long time in planning but excited at the way people have reacted to it so far! The idea for it was down to 2 main factors really. We’ve worked with other singles clubs in the past with Forever Cult & Allusondrugs releasing tracks through the Too Pure Singles Club. I love the idea behind it and the excitement of having a sort of ‘mystery’ package each month where you’re introduced to music & an act you may not have come across otherwise. The other main reason was to have an opportunity to work with new artists, this felt like the perfect way to do it.

You find a lot of labels choose to go down the vinyl route for their singles clubs, but Clue have chosen the alternative – digital. Although you’re still giving nods to retro with a special edition zine each month, why did you choose this path?

I love vinyl singles clubs but didn’t want to do something that’s already being done & being done really well. I wanted to do something affordable & £29 for a full year I feels like good value for money to me. Although the music is digital, we’ve tried to keep a focus on the physical with subscribers getting a t-shirt, tote bag & monthly zine. The idea behind zine is to allow the acts involved to put across another side of themselves & just have a bit of fun which is the what we try to do with everything at Clue.

When I think singles clubs, I think Too Pure and Communion but there are many others. Do you have a favourite?

I love Too Pure, Come Play With Me & Flying Vinyl. All vinyl but doing things slightly different to each other. I don’t know Communion so will go have a look at that after this.

Music subscription services are great, especially in limited runs, like with Clue Club. This hopefully will encourage true fans to start a collection. Is this something that you hope will happen?

Definitely. We often do limited runs of releases & make them quite unique in some way as we want people to have something individual & special. We’ve got a guy in Scotland called Andrew who has bought almost everything we’ve put out, including a cassette tape despite him not having a player at the time. He got one for Christmas & messaged me on the day telling me about how he’d had a really great experience sitting with a walkman & headphones on, reading through the insert I’d put into the sleeve which included stories of my past & memories with tapes. Everyone has their own relationship or things associated with certain songs & releases, our aim is to make things a little more interesting by doing really limited runs. It’s also a reward for the people who support, invest & believe in what we’re doing.

To celebrate the announcement of Clue Club, you’ll be taking a bunch of great bands to the Brudenell Social Club in Leeds for a special festive gig. What more can you tell us about the night?

We’ve got 9 bands confirmed to play which we’re announcing one by one in an advent calendar style. Announced so far are TRASH, Colour Of Spring & Avalanche Party which is a ridiculous line up alone, never mind sticking another 6 bands in the mix. I’m going to try & build an actual grotto in the Brudenell & dress up someone as a Santa so we can give out presents. We’re gonna get christmas crackers for everyone who comes. It’s just gonna be loads of fun. And it’s £8 so it’s less than a quid per band.

Team Picture, Fighting Caravans, Sunface and Colour of Spring are just a few of the bands to have already signed on to be a part of Clue Club. I hear that with the zines, the featured artist that month will contribute to the majority of the content inside, is this true?

Yeah, when we’re pulling together an issue I’ll say to the act “You do whatever you want” & then it’s up to them how much they put into it. It could be the full thing, it could be nothing more than that months song. It’s ace for me too as I get to see what bands come up with which is a nice surprise. As well as this we’ll have regular pieces including a crossword, ‘Mild Discomfort Uncle’ (think Agony Aunt but dafter/worse), playlists & contributions from groups/writers we think have interesting things to say. It’s a really collaborative thing & should give subscribers plenty to get their teeth into & be amused by. 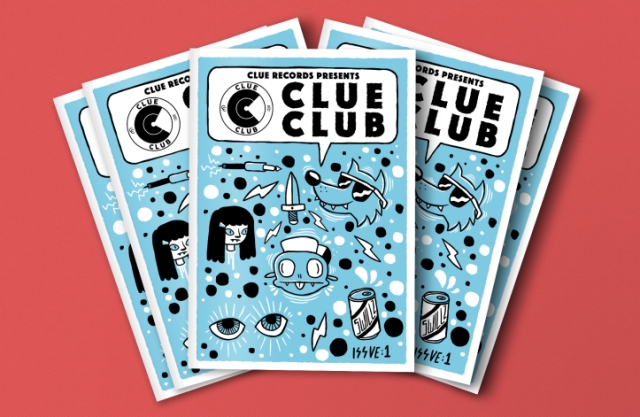 If anyone out there reading this would like to apply for future available slots to be featured in Clue Club, where would they go?

We’ve got a submissions page on our WordPress site so head there & get filling in: https://cluerecords.wordpress.com/submissions/

And finally, is there anything else that you’d like to add?

I used to think the name of Elvis’ “I’m All Shook Up” was not in fact about being shook up but was “A Maulchycup” which I understood to be a type of flower(like a buttercup…). I’m just glad my mistake wasn’t highlighted at school at the age of 14 in front of an English class full of people… And join the club, it’ll be fun!

For a years subscription to Clue Club, it costs just £28.99 (inc free UK P+P). That’s less than £2.50 per month! To subscribe, head here. And for all the latest on Clue Records, visit their Facebook.