Australian singer/songwriter Phia travelled to the UK recently to bring the joy of her artsy alt-pop to our shores. Her whistlestop jaunt across the country was shared with guitarist and collaborator Josh Teicher, and Sheffield band Frogbelly & Symphony. The journey takes in all the sights and sounds that were on offer in a poetic way, so sit back and enjoy the ride.

Official day one of the tour started with us getting the train to outer London to be picked up by Frogbelly & Symphony, the band we’re supporting on tour. Unfortunately I slept through the announcement where the train changed from a stopping all stations to express so we went to outer, outer London, in fact back to Luton airport. Everyone from F&S were very nice and rescued us from the airport, then we all drove out to Brighton for our first gig. I had a huge laugh with Chas Palmer-Williams, a local who performed after us. A very witty and lovely man with a guitar who writes songs about feeling old at parties, what will we do when David Attenborough dies and my favourite, a song about being a musician, which includes the lines: “I’ve heard of the word pension, I’ve heard of the word retire/ Investment is committing to a double-sided flyer.” Oof, cuts a bit close to the bone. 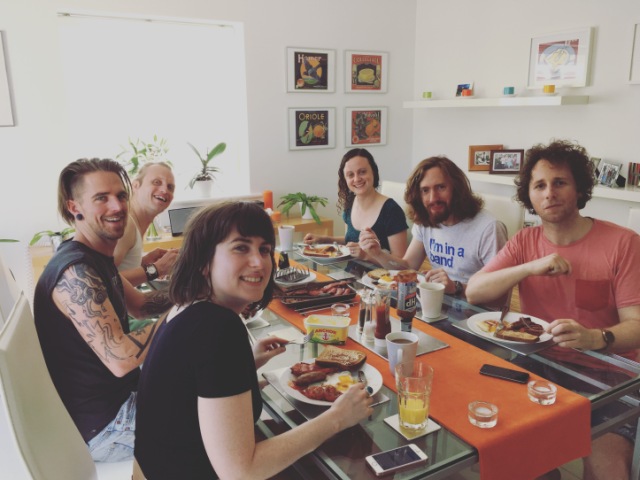 We stayed the night at Allie’s (the drummer from F&S) mother’s house outside of Brighton, and she made us a proper English breakfast in the morning. Seriously, sausages should always be on the menu at breakfast. Then we headed off to Bristol. Today was also the official release day of the album so I was Facebooking and Instagramming and Twittering and got a message from Vodafone UK that I’d used up all my data, which was meant to last the week. Oops. The gig that night was at a cute cafe and we had prosecco to celebrate the official release date of my album. Josh and I are giving one Australiana lesson to the band each day, yesterday was “servo” and “sanga”, tonight’s is Kylie – reinforced by ‘Spinning Around’ coming on the radio right as we were driving past the Jason DonerVan (van selling kebabs). Winner.

Today was our London show of the tour, and we performed at the George Tavern. There’s been an inn on that site for over 700 years – it’s mentioned in Chaucer, Pepys and more. It was very charming. We stayed the night at our friends place in Bristol and Josh played the theme to The Bill on my casio while we were waiting for the tube. Possibly annoying to locals, very funny to us.

Today we got the train to Sheffield and met up with the band again, this is their hometown. We went for a meandering walk through the town centre, marvelling at its industrial charm and massive portraits of famous people randomly scattered through the city. The gig was in the courtyard of a cafe, and had a lovely feel being a home-town show for Frogbelly & Symphony.

We went for a beautiful walk through a forest just out of Sheffield, which is on the edge of the Peak District. I felt like I was in an Enid Blyton book which was reinforced by us finding wild blueberry bushes near the end of the walk. They were delicious. Then we drove to Leeds and played at a gorgeous tiny cafe called Hyde Park Book Club.

The band kept up our outdoor health regime and we went back to the forest area we were at yesterday, only this time we swam in the lake. It was beautiful. That night we performed at the New Adelphi in Hull, a famous venue that housed early gigs of Radiohead and Oasis, amongst many others. I really felt the history of it when I stepped on the stage and had to pull myself out of it so I could focus on performing. It was a great way to end the tour. It felt sad to part ways with the band, touring really accelerates getting to know each other, and listening to their music every night is a great way to become a fan. They’ve got a couple of new songs which are total bangers, keep an ear out for them.

Phia’s debut album ‘The Ocean Of Everything’ is out now. Phia is currently on tour in Germany until 24th September, for a full list of dates head here.